The History of the Eagle Hotel

Erie County, Pennsylvania, is an area rich in history from the early 1800’s frontier stagecoach days. Because of the heavily traveled commerce route from Pittsburgh to Waterford, many establishments were built for travelers. 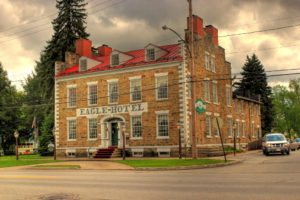 The family of Robert King settled in the Waterford area in 1795. Thomas King, his son, and Ebenezer Evans, a master builder, built the Eagle Hotel in 1826 out of quarried stone from the Waterford area. It became known as The Stone Hotel. Two fires could not destroy this hotel which had become a social site for politicians, dignitaries, and the elite populace. President Zachary Taylor was among its guests.

The Eagle Hotel with its unique Georgian stone architecture gained status as a resort and was advertised as one of the finest hotels in the country.  Over the years the hotel had many owners, but in 1977 it was purchased by the Fort Le Boeuf Historical Society wants to preserve this important historical building. Following modernization, the first floor was leased by Sugar Spice in 1998 and the restaurant stays there today. The second and third floors are used as a museum by the Fort Le Boeuf Historical Society.

With such a vibrant history, one can understand that employees and visitors would return to The Eagle Hotel after death. It is said that a chambermaid named Matilda worked at the hotel in 1845. Rumors suggest that she was responsible for the hotel fires.  Her spirit is associated with footsteps coming from the second floor and opening and slamming kitchen cupboard doors.  Employees experience an icy chill when she passes.  The sound of a crying baby can be heard.

Erie County, Pennsylvania, and the surrounding counties provide a treasure chest of haunted sites for paranormal investigators.  The country roads lead to adventures with the spirits, but be prepared for narrow, hilly roads in the dark of night with little communication with the outside world.